Board Games for High School Students

Does your teen love board games?  In our tech-heavy society, does s/he even play board games?  Your teen should!  Per Scholastic.com – Board games don’t need to be overtly academic to be educational. Just by virtue of playing them, board games can teach important social skills, such as communicating verbally, sharing, waiting, taking turns, and enjoying interaction with others. Board games can also foster the ability to focus, and lengthen attention span.

These award winning products are parent tested and kid approved. In order to be a Parents’ Picks Award Winner, these products go through a rigorous approval process with over 50 criteria, including thinking skills, character building, engagement, ease of use, innovativeness, quality, durability, and creative thinking. These products come highly recommended and we hope you will love these award winning products as much as we do.

Below are our 5 Award Winning Board Games for High School Students of 2017.  Quite a few of them have various versions and add-ons, which makes them especially fun.  We’ve listed them in alphabetical order.

There are quite a few Catan games to choose from – I asked several teens and they all liked this one the best.  Seafarers and Merchants of Europe were also mentioned as favorites.

SPACE the Final Frontier. The many resource rich planets within the limits of Federation territory await exploration and settlement. Build outposts and star bases to extract the resources. Using your fleet of starships, establish supply routes that enable you to boldly go further into deep space. Avoid resource shortages by trading with your opponents and Federation neighbors.

CHRONOLOGY BOARD GAME, from Buffalo Games

Think you know which came first – the invention of mayonnaise or decaffeinated coffee? Lincoln’s Gettysburg address or John Deere’s first plow? Test your knowledge with Chronology by Buffalo Games – the game of all time!

Build your own timeline of cards. Someone will read you a historical event from a card. You decide where that event falls on your timeline. If you are right, keep the card and your timeline grows. The first player to build a timeline of 10 cards wins. Contents include 429 double-sided cards with 858 events. Recommended for ages 14+.

Pandemic Board Game, from Z-Man Games

Several virulent diseases have broken out simultaneously all over the world! The players are disease-fighting specialists whose mission is to treat disease hot spots while researching cures for each of four plagues before they get out of control.

On each turn, a player can use up to four actions to travel between cities, treat infected populaces, discover a cure, or build a research station. A deck of cards provides the players with these abilities, but sprinkled throughout this deck are Epidemic! cards that accelerate and intensify the diseases’ activity.  A second, separate deck of cards controls the “normal” spread of the infections. For ages 13+ – but again, we know adults that play this game all the time.

Take over the world in this game of strategy conquest, now with updated figures and improved Mission cards. In the Risk game, the goal is simple: players aim to conquer their enemies’ territories by building an army, moving their troops in, and engaging in battle.

Depending on the roll of the dice, a player will either defeat the enemy or be defeated. On the battlefield, anything goes! Defeat all of the enemy troops in a territory to conquer that territory and get one step closer to global conquest. The player who completes his or her secret mission first – and reveals the Secret Mission card to prove it – wins.

As you can see, the box reads 10 and up – but again, we believe this is more of a teen game.

Ticket to Ride Germany Board Game, from Days of Wonder

In Ticket to Ride Germany, players build their own rail network to connect cities listed on their Destination Tickets. Watch out for opponents who might be trying to reach the same far-flung corners of the German empire and outwit them by collecting valuable Passenger Meeples from the cities faster than they can.

There are many Ticket to Ride games to choose from.

Recommended for ages 13-up.  Again, we know 30-somethings that play this game all the time!

Did you enjoy our list of award winning board games for high school students?  Would you like to see additional award winning products?  Visit our homepage for fun and amazing lists.  🙂 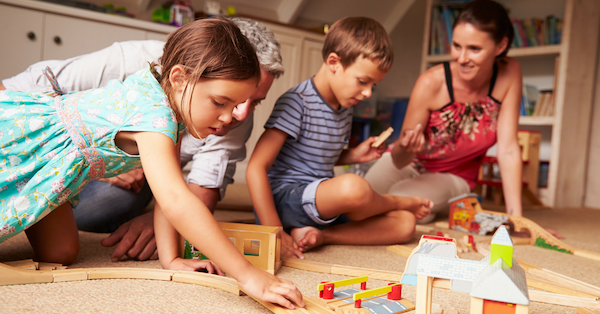